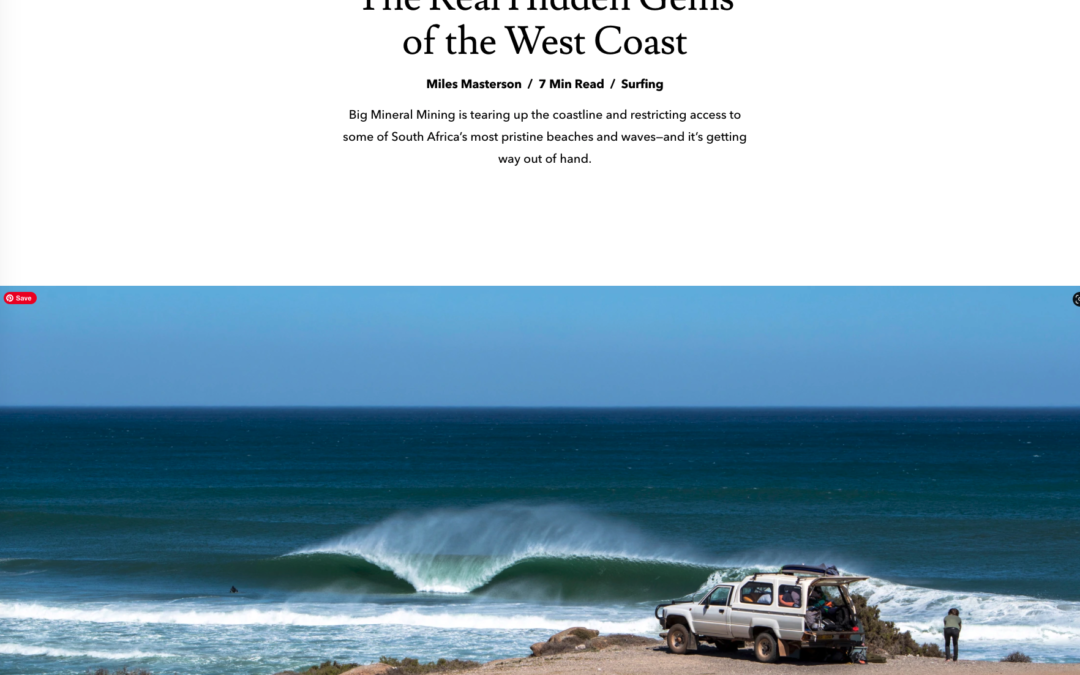 The Cleanest Line, the official blog of international clothing brand, Patagonia, recently published ‘The Real Hidden Gems of the West Coast’, an article by Masterson Communications’ Director Miles Masterson about the impact of Big Mineral Mining on the South African environment.

Writing in his capacity of Media Liaison for non-profit organisation, Protect The West Coast (PTWC), Miles reveals how foreign mining companies are ostensibly exploiting the mineral wealth of the beaches and coastal zones of South Africa’s fragile and hauntingly beautiful Cape West Coast, seemingly with the tacit approval of the country’s government.

Travelling to the region to attend a public meeting held last year by a mining company applying to prospect for minerals in the area near Lamberts Bay, Miles was struck by the passion of local residents, who despite demographic differences, were united in their opposition against these mines.

While the effect on the environment is potentially devastating, one of the key objections of both West Coast locals and visitors is the insistence of these international mining companies to prevent public access to stretches of coastline, beaches and surf spots on the West Coast.

Miles spoke to several key stakeholders in the region, building a picture of corporate and government chase of profits on one side vs. the rights of regular South Africans, including indigenous communities, on the other, with a damaging effect on livelihoods in the fishing, tourism and other local industries.

“There is less and less access and now more coastline is being given to mining than to citizens,” said West Coast anti-mining campaigner Suzanne Du Plessis, who has been fighting this threat for years.

PTWC, which was formed by Cape Town professional big wave surfer Mike Schlebach after he was barred from accessing one such beach in late 2019, has increased its campaigning against mining and other threats to the ecology and people of the West Coast region.

The organisation has mobilised and among many activations, hosted several successful awareness campaigns and released a short movie, ‘Ours, Not Mine’, in late 2021.

However, in recent months a slew of prospecting and mining applications have been lodged and approved, including at the mouth of the stunning and sensitive Olifants River Mouth near Vredendal, forcing PTWC to increase its activism and objections.

Read The Cleanest Line: The Real Hidden Gems of The West Coast